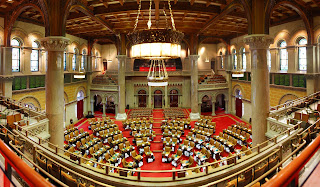 
That opening was exploited by Assembly Majority Leader Joseph Morelle, who hit the pavement and began gathering a consensus on the concerns shared by Assembly holdouts. His legwork paid off in the form of a revised MMA Bill (a.k.a., "the Combative Sports Bill"). Concerns over concussions, funding for a long-term study of brain injury, amateur MMA regulation - it was all in there. And it was enough to get beyond the magic "76 'yes' votes in the Democratic conference" number that has eluded us for so long and kept any version of the MMA Bill from getting onto the Assembly floor for a vote.

Obviously, time ran out on the legislative session before the MMA Bill could be passed, but that was really an issue with timing and Speaker Heastie juggling too many other more important bills simultaneously. We got there though, got to that special sweet spot, and we're still there - a fact that could mean passage of the bill early in the 2016 legislative session.

All because of Majority Leader Morelle and the revised MMA Bill.

*Also worth mentioning is how much constituent input helped. When it was realized that the prior version of the MMA Bill would effectively kill the amateur MMA scene, fighters and promoters alike mobilized and made their voices heard to their local legislators. Those concerns percolated up the chain - hence an MMA Bill that actually helped, not hindered, the sport. The system does work sometimes, and bravo to every New Yorker who trekked to Albany or made a phone call or fired off a polite email.
Posted by Jim Genia at 1:30 PM

all my homework help agency said...

For each person, these will be their own things that he will remember this year and will be able to leave them in memory for a long time.