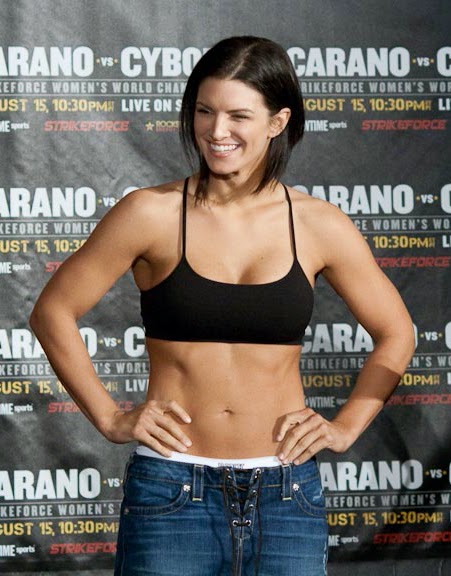 When it comes to UFC female bantamweight champ Ronda Rousey, there's been a lot of chatter lately over who her next opponent should be. Does Cris Cyborg, the Invicta FC champ with a checkered history of performance-enhancing drug use, deserve it? Should Cat Zingano, who's coming off a bad knee injury, be next? Opinions vary, but one name being tossed about almost certainly shouldn't be getting a crack at Rousey's belt, and yet despite that, it's starting to seem like she almost certainly will.

I'm talking about Gina Carano of course, who may have helped make women's MMA what it is today, but who also hasn't fought since she was crushed by Cyborg in 2009.


Here's what Rousey had to say on the matter, courtesy of Dave Doyle at MMAFighting:


"She's one of the pioneers on the sport," Rousey said. "She's the reason I fight at all. You can't say she's just coming in off the street. How can you say no to the woman that I owe everything to? I would bend over backwards to fight her. I'm not going to make her run through the gauntlet to fight me. I would show up at her house if that's where she wanted to fight."

Of course Rousey would want that fight, as it's the only one that could command a decent number of pay-per-view buys (of which Rousey would get a percentage of). And in terms of Carano being an actual threat to the champ's belt, well, let's just say that maybe she's a better actress than the champ - maybe - but that's about it.

The sad truth is that the UFC is a business, and pitting the champ against a B-level movie star could be the best option in terms of selling PPVs and helping women's MMA to continue to grow. There simply isn't anyone else out there compelling enough.

What do you think - regardless of whether or not she deserves it, should Carano fight Rousey?
Posted by Jim Genia at 10:00 AM