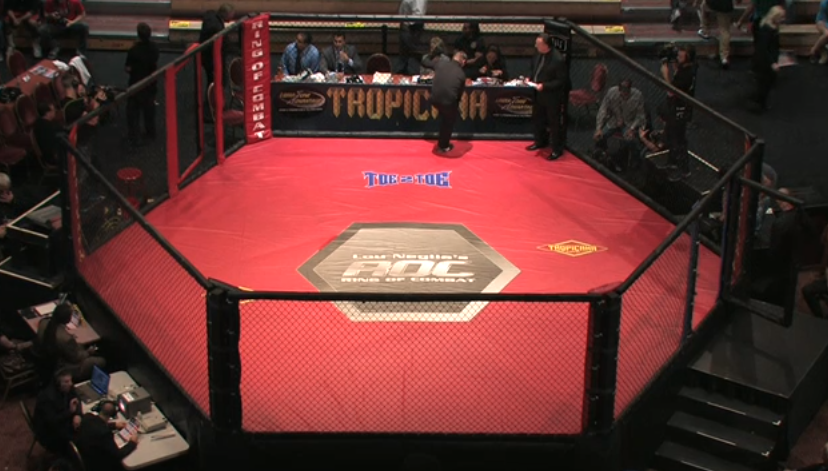 Welcome to the ROC 48 liveblog, which I'm doing from the comfort of my home office thanks to GoFightLive and it's absolutely perfect stream. Since I'm not cageside for this one, I won't be able to tell you which fighter freaked out and trashed the locker room after his loss, and which section of the audience threw a hissy fit because their hero got crushed. But I can - and will - describe the fights. So giddyup!

First bout of the night:

Round 1: Referee Keith Peterson bades them to start and the immediately the taller Sladky begins to work his distance striking while Martin seeks the tie-up and takedown. At a little over a minute in Sladky presses his opponent against the fence and dumps him to the canvas with a double-leg. Martin inexplicably tries to cage-walk by giving up his back, so Sladky eases into back-mount, flattens him out and makes him miserable. Someone looks like they trained zero jiu-jitsu for this match - can you guess who? Let me give you a clue: he taps out to a rear naked choke at 2:53 of the first round.

Announcer Peter Neglia gets in the cage and says that's it for the prelims, and then an opera singer comes in and does the National Anthem. Okay.

Round 1: As jiu-jitsu purple belts and brown belts are wont to do when they make their pro MMA debuts, Corchado and Bohanan spend about half a minute probing each other with strikes, then get to work on the ground. Bohanan scores with a takedown, passes guard, transitions to back-mount and slips on the body-triangle, and when Corchado escapes, Bohanan settles into top position and just rains down strikes like there's no tomorrow. Corchado shrimps nonstop, but eats about a hundred fists. Referee Peterson mercifully steps in and waves the bout off at 3:47 of Round 1. Total domination by the Ricardo Almeida-trained brown belt. Total domination.

Commentators Dino Kostakio and the Garv are hyping Gillespie's wrestling credentials like crazy as the fighters make their way to the cage, so already expectations are high for what's about to happen.

Round 1: Referee Liam Kerrigan signals for them to start and almost immediately Gillespie employs a lightning-quick shot and takes Priest down against the cage. Gillespie works for a guillotine, but Priest escapes, gets up and throws a left hook before being taken down again. The wrestler takes his back, and when Priest wriggles free and gets back to his feet, Gillespie easily gets him back down and controls from top position. The round ends with Gillespie doing whatever he wants and Priest trying to stay in the fight with punches from the bottom.

Round 2: It's clear Priest needs to keep things standing, and yet when they exchange in the opening seconds of the round, it's Gillespie who scores with a right hand. As a result, Priest goes for a takedown of his own, is stuffed, and then it's back to Gillespie large and in charge in side-control while Priest squirms like a frantic worm. Unfortunately for Priest, he eventually squirms the wrong way, and Gillespie takes his back again - and this time sinks the rear naked choke for the tap.