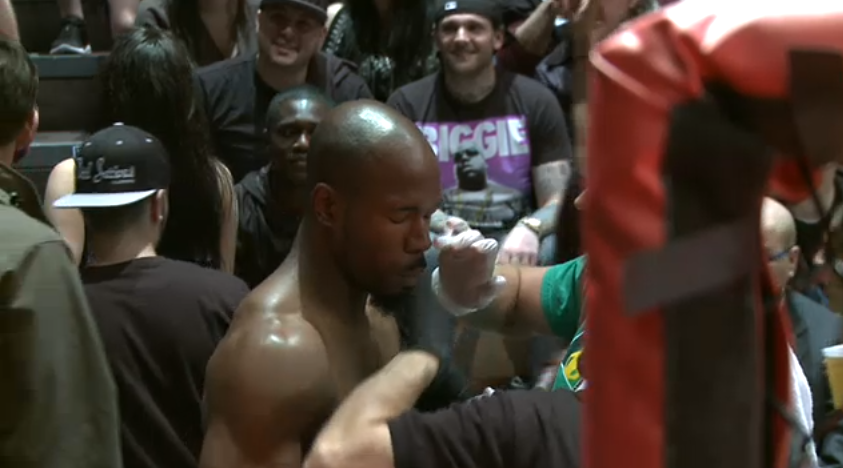 Elshamy's got Matt Serra in his corner, so maybe that means he knows something about grappling.


Round 1: Elshamy starts off going for takedowns without setting them up, so Mitchell peppers him with fists while circling away. After eating a bunch of those, Elshamy gets tentative and cautious. Finally, after almost two minutes, Elshamy gets enough forward motion going to propel him through the punches and into the clinch, and with Mitchell against the cage, he pulls him down and takes side-control. The local fighter takes mount, and for the next 30 seconds drops leather - so much so that Mitchell taps out. Man, Mitchell had the tools to win this one and threw it all away.

Now it's time for the time-honored tradition of Lou Neglia calling all celebrity ROC veterans present into the cage to give them props. This is usually when I run downstairs to the locker room and use the bathroom.

Round 1: Tyrrell comes out mixing kicks with a takedown attempt, but Brown flips the script, nails two trips, and takes his back. The Tong Dragon fighter escapes and gets in Brown's guard, and Brown wastes no time swiveling into an armbar. Tyrrell does his best to resist, yet resistance proves futile, and the tap comes at 1:53 of the round.

Next, more opera singing. Then it's a featherweight title fight.

Round 1: Jenkins' right hand is in play almost immediately, and while he's looking to find his range, Hobbs fires off a few kicks then briefly gets the champ down with a takedown. Jenkins wall-walks to his feet, and with some space, the leather flies. Before anything bad can happen to him, Hobbs gets the takedown, threatens with a rear naked choke, and then they scramble to their feet, with Jenkins establishing control off a sprawl. In no time Jenkins has Hobbs' back, and when he flattens him out and unloads with punches, the ref steps in and calls it off. Jenkins keeps his belt in convincing fashion.